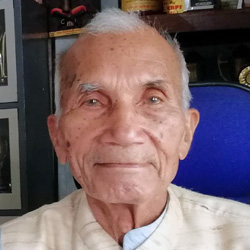 A courageous and humble Gandhian worker, Mr. Dharampal Saini spent his childhood in Dhar and Saharanpur. His days were spent in Dhar under the strict discipline of his father and while playing and being pampered by his grandmother in Saharanpur. His mother was a silent and hardworking but courageous woman. The support of home and friends remained faithful. In class VIII, Mr. Saini got the opportunity to read Ramakrishna Paramhansa and Vivekananda. One day, he took a spontaneous resolution that he will not do a government job, he will not get married and he will serve the country. On the first day at Inter College Dhar, a passionate teacher of Mr. Dharampal Saini said in his first talk that today I will teach the balance sheet of lifestyle and not business. The first Bhoodan discourse of Pochampally (Telangana) by Vinobaji was read to him by the same teacher. Mr. Saini went to the village with him to discuss the views of Mahatma Gandhi and Vinoba Bhave on community prayer, cleanliness, education, and freedom struggle. He got immersed into the ideas and philosophy of Mahatma Gandhi, Vinoba Bhave and Swami Vivekananda.