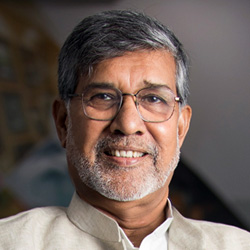 Mr. Kailash Satyarthi has been a tireless global advocate of children’s rights for four decades now. He left a lucrative career as an Electrical Engineer and started ‘Bachpan Bachao Andolan’ (Save the Childhood Movement) to rescue children and their families from the shackles of slavery paving way for their reintegration into mainstream society. Under his aegis, the movement has rescued over 90,000 children from the scourge of bondage, trafficking and exploitative labour till date in India.

In 2014, he was awarded the Nobel Peace Prize for struggle against the suppression of children and young people and for the right of all children to education. In 2016, Mr. Satyarthi founded a novel and unique initiative Laureates and Leaders for Children that has brought together several Nobel Laureates and Leaders from across the globe to build a sense of urgency, collective responsibility and a strong moral voice to galvanise political will for ensuring the rights and safety of world’s children and young people in an endeavour to end violence against them and creating a child friendly world.