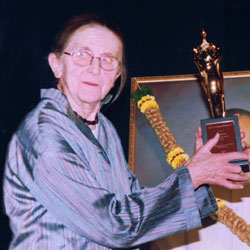 Born into a family of farmers in Denmark and grew up as such. Became interested, when she was just 20, in social work, teaching and writing. This has been her mission for the last 55 years.

Back in Denmark in 1954, started writing about her experience of India and Gandhiji, his thoughts and his work. Wrote several books for her students and for the youth of her country.

Love for India brought her to India at regular intervals. Stayed at the "Marjorie Sykes" Ashram at Kotagiri for a month. Went on a campaign of Bhoodan at the inspiration of Vinobaji.

Went to East Pakistan (now Bangladesh) in 1965, at the behest of UNESCO, as an advisor on village work and implemented the rural development programmes of Gandhiji and Vinobaji.

Sponsored a group for helping Laxmi Ashram at Kausani particularly to educate and maintain poor neglected girls in the Kumaon hills, to expand the activities of the Ashram and to take their students to Denmark.

Got deeply involved in the Chipko movement. Also took keen interest in the protection of Silent Valley in Kerala.

Is passionately committed to the peace movement in Denmark and other countries. Has spent a great deal of time in peace missions in different countries.