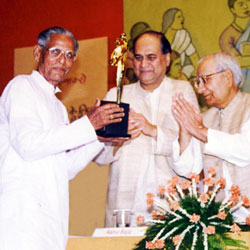 Contributed phenomenally in the sphere of organic farming. Practiced and developed natural and organic farming not only for its value but also for its profitability. Has also undertaken waste land reclamation.

Is an environmentalist to the core. Has been awarded as 'Person of the Year' in 1993 by Limca Book of Records and 'Nisarga Bhushan' Prize in 1993 by Nisarga Pratisthan, Sangli.

Lives at Umbergaun in Gujarat. Has developed a wonderful model of natural farming. Has not used any fertilizers or pesticides for the last 38 years, nor tilled his farm, yet reaps a record harvest year after year.

Today people, including Agricultural Scientists from all over Ithe world, from far and near come to take a leaf from his book.

In the words of the internationally reputed Japanese Agricultural Scientist Masanobu Fukuoka, "I need not visit India again. Bhaskarbhai's farm will speak for me.”