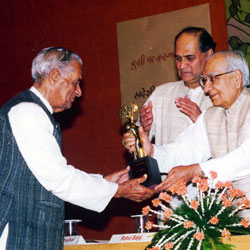 Graduated from Gurukul Kangri and obtained the degree of Vedalankar due to his proficiency and expertise in the study of Vedas.

A veteran Gandhian, he was inspired by the call of Mahatma Gandhi and took a vow to wear khadi all his life. Became synonymous with the word ‘khadi’ is widely respected as the "Bhishma Pitamaha" in the Khadi world.

In 1938, became the Co-editor of ‘Hindustan’; Devadas Gandhi, son of Mahatma Gandhi was its Chief Publisher.

Post independence, opted to work in the Gandhi Ashram established by Acharya Kriplani though his services were in great demand in political programmes. Was appointed as the Secretary of the Punjab branch of the All India Committee for the relief of displaced persons which was started by Dr. Rajendra Prasad, India's first President.

Established the Khadi Ashram in Panipat. Through this institution he expanded the Khadi work so considerably that branches were opened in Punjab, Himachal and Delhi. Also established in 1963 Vidya Bharati, an educational institution on the basis of Gandhian Ideology.

Was appointed in 1966 as a member of the Commission and later as its Chairman in 1977 till 1980. Apart from his involvement as Trustee in several Constructive institutions in Gujarat, Rajasthan, Uttar Pradesh, Punjab, Jammu & Kashmir and Haryana, he is also the Vice Chairman of the Central Gandhi Smarak Nidhi. He is a prolific writer on various topics concerned with economics and public affairs.