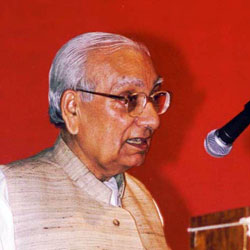 Master of Science (Technology) from the Banaras Hindu University worked as a Scientist with the Council of Scientific and Industrial Research, New Delhi.

Held prominent offices in the Parliamentary and Organisational wings of Congress Party and later the Janata Party and the Janata Dal.

Was a member of the Executive Council, for several years, of the Institute for Defence Studies and Analyses. Governor of Andhra Pradesh and Tamil Naidu.