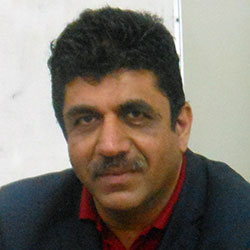 Dr. Ziad Medoukh, a teacher and researcher is a Palestinian professor and Director of the French Department at Al-Aqsa University in Gaza, Palestine. He is a staunch believer of the principles of democracy, freedom, human rights and is part of the Francophonie; and was the first Palestinian to be recognized as the Knight of the Order of Academic Palms of the French Republic in 2011.

Dr. Medoukh has manifested the development of a nonviolent economy in the Gaza Strip by mobilizing Palestinians to produce, use and market local products. He has initiated agricultural and organic farming in the community and handicrafts in villages and refugee camps. Agricultural cooperatives are also formed.

Dr. Ziad closely works with the young people in Gaza through different initiatives andpresents to his students a brilliant testimony of non-violence.His decision to be present for the young people, to build their morale and give them hope in the midst of difficult and traumatic situations, considering the bleak situation marked by the blockade, the attacks, and lack of prospects for the future; is exemplary.

The number one concern of Dr. Medoukh is to sensitize each in the Gaza Strip on non-violence and peace, either directly through the actions and activities of the Peace Center or indirectly via his testimonies, writings, poems, articles and information dissemination on non-violent actions in Gaza. He is an indefatigable speaker for Palestine in French-speaking countries. Apart from his participation in several trainings and meetings on non-violence; exposure and training visits on non-violence and peace for the teachers and the youth are also organised to France, Switzerland, Jordan, Egypt and Lebanon to enlighten them. International solidarity is Dr. Medoukh’s vision and mission.

Dr. Medoukhalongwith his friends set up the Peace Center in 2006.Its actions following Gandhian principles of nonviolent economy have been able to show the importance of education as a form of non-violent resistance in Palestine.

In 2014, and after the last Israeli military offensive against Gaza, Dr. Ziad Medoukh set up a psychological support cell to deal with traumatized children of war. Between 2014 and 2017, the psychological support unit organized more than 100 sessions in the kindergartens, schools and shelters for children in Gaza. More than 4,000 children have benefited from these sessions. Dr. Medoukh brings joy to the children of Gaza.