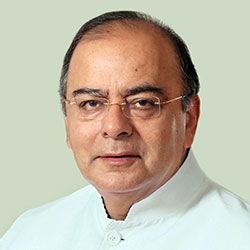 Mr. Arun Jaitley is an Indian politician and lawyer, who is the current Union Cabinet Minister for Finance and Corporate Affairs, Government of India, since 2014 onward. During this period, he had held additional charge of Defence and Information & Broadcasting Ministry, for a brief time.

He is a Senior Advocate of the Supreme Court of India. In 1989-90 he held the position of the Additional Solicitor General, Government of India.

Since 1991, he is the member of the National Executive of the Bharatiya Janata Party (BJP). Mr. Jaitley was the Party’s General Secretary and Spokesperson from July 2002 to January 2003.

Besides reading and writing on legal and current affairs, Mr. Jaitley has also delivered several lectures on many important subjects including IT Convergence, the Broadcasting Laws of India, Disinvestment and Review of the Functioning of the Indian Constitution.