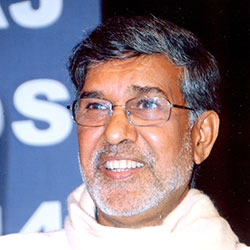 In 1980, Kailash Satyarthi gave up a lucrative career as an electrical engineer to initiate a movement to end child labour, exploitation, and for education. He is internationally acclaimed child rights’ activist and pioneer in the fight against exploitation of children and illiteracy. He is renowned for inclusion of child labour to global social and political agenda, and for leading the movement for education for all.

In 1998, Kailash Satyarthi organised the Global March Against Child Labour across 103 countries. With participation of 7.2 million people and 20,000 civil society organisations, it is the largest people’s campaign on child labour and led to the International Labour Organization’s (ILO) Convention 182 for the elimination of the worst forms of child labour. Today, Global March is the largest movment of civil society organisations, teachers' union and trade unions united in their determination to end child labour, and promote education for all children. He is also the initiator of the Global Campaign for Education, the largest education campaign coalition in the world.

In 1980, Kailash Satyarthi founded the grassroots movement Bachpan Bachao Andolan (trans. Save the Childhood Movement) in India, that has rescued over 80,000 children from the scourge of bondage, trafficking and exploitative labour till now. He successfully spearheaded a countrywide movement to make education a Constitutional Provision which subsequently paved way for the Right of Children to Free and Compulsory Education Act, 2009 in India. In 2013, his unrelenting efforts led to defining and criminalising trafficking in persons in Indian criminal justice system, and in putting the spotlight on missing children through research and legal action.

Kailash Satyarthi is credited for the first ever certification and social labelling mechanism for child labour free carpets in South Asia - Goodweave (formerly Rugmark) 1994. Since then he has been involved in promoting ethical business and promoting child labour free supply chains in garment and textiles, mica mining, cocoa farming, sporting goods sector, among others.

In 2014, he was jointly awarded the Nobel Peace Prize 2014 with Malala Yousefzai.