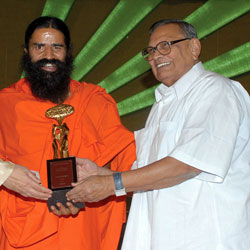 Mr. Lavanam's earliest work was as a young volunteer in the independence movement. Subsequently he came to be a part of Gandhiji’s Ashram in Sewagram. He worked with his father who conducted night classes for dalits and also organized social events where untouchables and higher caste people dined together. Thereafter, he joined the Bhoodan Movement of Vinobaji and toured with him extensively.

He was with Vinobaji, and later with Jayaprakash Narayan during the historic surrender of dacoits in Chambal Valley and elsewhere.

Mr. Lavanam began his work with criminal tribe settlements in Andhra Pradesh. The reforms and rehabilitation was carried out very systematically in 5 stages- from counselling to gaining the confidence of the criminals to the process of rehabilitation to dealing with the back lash and also working for women empowerment and child rights and finally using education as a tool of social integration.

In the rehabilitation of Joginis, Mr. Lavanam has played a seminal role. For centuries, joginis have been forced into becoming village sluts. Mr. Lavanam and his team shouldered the responsibility of reforming and bringing Joginis to mainstream. With help and support from various quarters, the Jogini tradition was uprooted by the year 2000.

Mr. Lavanam dismantled many superstitions rampant in the community. He has always promoted intercaste marriages. He is an important Sarvodaya leader. Now in his seventies, Mr. Lavanam is still very active and his ambition is to bring the naxalites and other extremists into a non-violent way of life.