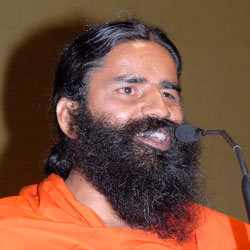 Born as Ramkishan Yadav in Said Alipur in the Mahendragarh district of Haryana. Suffered from paralysis as a child. Has stated that he was able to regain the full functionality of his body again through yoga. Studied Sanskrit and Yog in a gurukul. Eventually, assumed Sanyas (monastic living), taking his present name.

Established the Divya Yog Mandir Trust in 1995. Conducts immensely popular TV programs with over 20 million regular viewers in several continents including Africa, Australia, Asia, Europe and America. Attendance at his Yog camps is as high as up to 20,000 people.

Followers of these programs have claimed relief from a variety of ailments such as blood pressure, elevated blood sugar, spondylitis, hepatitis and obesity. His emphasis on teaching and making available the practice of Pranayam for the masses as against asanas is what differentiates him from other yoga teachers.

Launched his flagship project, the Patanjali Yog Peeth (PYP) Trust in 2006. The aim is to build the world's largest center for Ayurveda and Yoga that includes facilities for treatment, research and a teaching university.

Has raised a number of national issues through his yog camps. Most of the issues demand change in governance policies of India and the life style of common people like malpractices in the agricultural sector, consumption of fast food and soft drinks, exploitation of farmers, poor condition of indigenous industries, abject poverty and unemployment etc.

Enunciated Bharat Swabhiman Andolan with the strong belief that fighting government corruption is the first step to changing this state of poverty.

Received Honorary Doctorate of the Kalinga Institute of Industrial Technology, Bhubaneswar, Orissa at the hands of scientist and Nobel laureate Richard R. Ernsin in recognition of his efforts at popularizing the Vedic science of Yog.