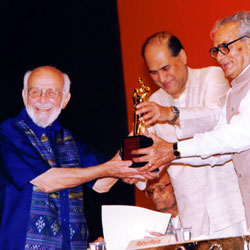 Drawn to Gandhi's teachings since student days. Was a member of United States Navy but resigned when the World War II broke out; believed that there was no moral basis for war. Since then, is a total believer in pacifism and non-violence.

Undertook various forms of protest against nuclear weapons including organising public meetings, a Prayer Vigil on the steps of the National Capital in Washington, sailing a small unarmed vessel into the United States (US) nuclear bomb test area, and taking a Peace March from San Francisco to Moscow in 1961-62. Established the ‘Peace Brigade International’ in 1981.

Set up the ‘Upland Institute of Social Change’ with a view to giving practical shape to the idea of non-violent resolution of conflicts. The Institute granted certificates and a Master of Arts upon completion of the one and the two year programmes.

Took the initiative to create the ‘Philadelphia Life Centre’. The participants, as and when they gained experience, were called to England, Europe, Japan and India to demonstrate through workshops their experiences of non-violent action.

Spoke against the "holy war" on Afghanistan as the US response to the attack on Twin Towers. Also organised a peace march to Washington calling for a halt to the destructive war.