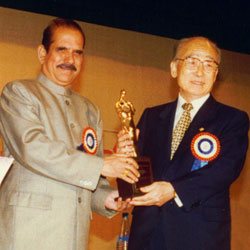 A passionate preacher and promoter of International Peace and Understanding. Has personally played a remarkable role through his teachings, researches, lectures, campaigns, rallies, concerts, commemoration ceremonies and in a host of other forms for the realization of a peaceful international society.

As President of the International Association of University Presidents and at the 6th Triennial Conference held in July 1981, he delivered a keynote address titled “The Great Imperative: Peace is more Precious than Triumph” and drafted a resolution for the “International Day and Year of peace” which was voted without discussion.

Established the Graduate Institute of Peace Studies in 1983. In the use of peace education. Took a decision to publish “World Encyclopaedia of Peace” in commemoration of UN International Year of Peace.

Proposed the Qufu Declaration for establishing Ethics and Morality in the 21st Century, which was unanimously adopted at the United Nations (UN).

Is formulating a new plan, based on his reflection and analysis on human history over 5000 years, that he hopes will improve the quality of humanistic human life.

Has been honoured with numerous Awards including the Medal of Honour, the Medal of Honour from the President of the Red Cross. The Dag Hammarskjold Award in Cultural Merit, UN Special Award of Meritorious Services on Peace, and a Man Hae Peace Award of Korea.