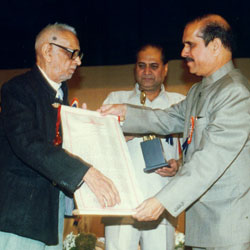 An extraordinary combination of patriotic Indian Civil Services (ICS) administrator, social worker, a rebel for the right cause and non-violent warrior of the Gandhian mould. His life has been a saga of service, sacrifice, compassion and commitment to constructive work.

Served as Assistant Commissioner and District Collector in various districts of the then Central Provinces and Berar province for 13 years. Yet was a staunch nationalist. Used to wear Khadi. Refused to fly the Union Jack on the Collector's residence, as was the prevalent practice. Ultimately resigned from the ICS in 1943, met Gandhiji and under his guidance submerged himself in constructive work. Came in contact with Acharya Vinoba Bhave. Under their combined influence, left politics and dedicated himself to the Bhoodan Movement.

Served as a Minister for Revenue, Civil Supplies and Agriculture from 1946 to 1949.

Was appointed as Food Commissioner in 1949 and later as member of the Planning Commission. Contributed to the making of the first Five Year Plan.

Became a top-ranking leader of the Sarvodaya Movement and served as President of the Maharashtra Sarvodaya Mandal from 1957 to 1969 and President of Acharyakul for many years. As President of Dattapur Kushtadham he did yeoman service in the cause of lepers and helped Maharogi Seva Samiti founded by Shri Baba Amte.

Is one of country's most selfless and patriotic leaders who has consistently declined awards and felicitations and thus represents the quintessence of the Gandhian tradition.