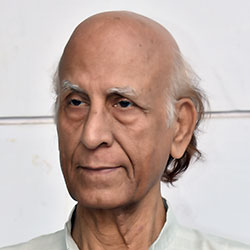 Efforts of Mr. Bhawani Shanker Kusum in different fields of social service, particularly in rural Rajasthan has changed the lives of thousands of people afflicted by leprosy, the physically handicapped and also the poor rural and women of backward castes and tribes.

Mr. Kusum was encouraged to carry out meaningful rehabilitation work of the leprosy patients during one of his meetings with Baba Amte in 1987. He also sensitized and guided the rural poor women on the benefits of saving money and linked them to micro credit facilities, which has kindled a spirit of entrepreneurship in the women. Mr. Kusum initiated ‘Gandhivan wasteland development project’ wherein twenty five hectares of wasteland in the Aravalli hill range is transformed to a forestland involving community participation and its outcome is a balanced eco system.

Mr. Bhawani Shaker Kusum’s work is multi-faceted and he is a staunch Gandhian in his thoughts and actions.