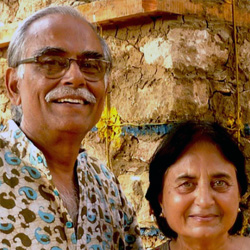 Mrs. Rupal Desai, an architect and Mr. Rajendra Desai, a structural engineer, shifted from their career in corporate world, modern architecture and petrochemical plants in USA to voluntary sector in India in 1984. They decided to work for rural India for the betterment of its people and the community; and not to work for earning a living.

After returning to India, the couple evolved understanding about the socio-technical side of rural housing and sanitation, and their relationship with local economy and livelihood in line with Gandhian economics of Gram Swaraj.

In 2000, the couple set up National Centre for Peoples' Action in Disaster Preparedness, a platform working towards capacity building of communities in disaster risk reduction through the application of science and technology to rural housing.

While in Chamoli and Kedarnath in Uttarakhand, Kashmir, and Nepal in the aftermath of natural catastrophe, they have developed simple and most viable improvements in earthquake-resistant stone-mud buildings called “Containment Reinforcement”.

Since 2004, under the couple’s guidance, their organization has been conducting on-going, skill up-gradation program for building artisans in the rural areas of Gujarat to train them in the most fundamental, but critical aspects of building construction with scientific principles and to bring learning to their doorstep.

The couple with its team was involved in evolving a Building Artisan Certification System for the Ministry of Housing, Government of India and have produced detailed guidebooks for the artisans for five different modules in Hindi, Gujarati and English languages.

Mrs. Rupal and Mr. Rajendra Desai have led a path of search and research for socio-economically viable building options that could bring sustainability for coming generations.