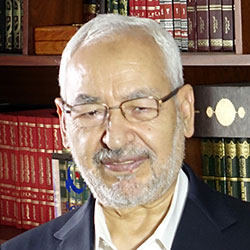 Sheikh Rached Ghannouchi is the President of the Ennahdha Party, the largest political party in Tunisia. His perseverance and ability to engage with the viewpoints of other party groups in Tunisia has guided his party to adopt a modern, forward-looking constitution and peaceful transitions of power, leading to the establishment of a durable democracy in Tunisia.

Sheikh Ghannouchi was born in a modest farmer’s family in Gabes in Southeastern Tunisia. He completed his early education in his village, after which he studied an Islamic curriculum in Gabes and Tunis in the Zaytouna College and University. Sheikh Ghannouchi went to Egypt, Syria and France for further studies.

In June 1981, Sheikh Ghannouchi formed the Islamic Tendency Movement known in Tunisia by its French acronym, MTI, which aimed to reform Islam and to revive Tunisian society in the intellectual, social, political, cultural and educational spheres.

From the beginning of his political career, Sheikh Ghannouchi has a very progressive approach to women’s participation in public life and pursues that their participation is essential. Commitment to women’s rights was included in the Founding Declaration of the MTI issued in June 1981.

It is due to the strategic decisions made by the Ennahdha leadership that Tunisia has managed to preserve the achievements of the 2011 revolution and remain an island of democracy in a sea of autocratic regimes in the Arab world. Tunisia is the only Arab country to have made such a peaceful democratic transition. As a result, Tunisians of all political and ideological persuasions now live at peace and advance to mutual understanding.

Thus, Sheikh Rached Ghannouchi has produced a political transformation in Tunisia by guiding it through a difficult time of transition from an unstable, polarized and acrimonious context towards a durable democracy; by using Gandhian methods of tolerance and empathy to other’s views, forgiveness to acts of transgression and being flexible in negotiations. He has repeatedly displayed a generous spirit of accommodation in the larger interests of the nation, and emerged from great oppression to become a champion of broadmindedness and democracy.