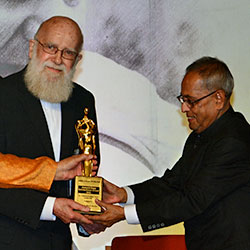 In 1972 Mr. Jean-Marie Muller took the initiative to create the MAN (Non-Violent Alternative Movement). Its mission is to put forward the specific contribution of non-violence in the everyday life, education and social and political struggles. MAN promotes the principles and the methods of non-violent strategy, to support a positive resolution of the interpersonal, intercommunity or international conflicts. By thinking, acting and training, MAN thus seeks to promote justice and freedom. Mr. Muller reaffirms his conviction that human kind will not be able to meet the challenges that the world presents today if it does not follow Gandhi’s intuition's, as he invites us to revisit our inheritance and our historic traditions, and to become aware of our compliance with the reign of violence.

Professional life and official missions: A professor of philosophy until 1970, Mr. Jean-Marie Muller left teaching to dedicate himself full time to the study of non-violence and its promulgation in his writings, demonstrations and speaking. For almost 50 years, he has been a spokesperson and facilitator of the Movement for a Non-Violent Alternative, which he founded in 1974.
In 1984, Mr. Jean-Marie Muller participated in the creation of the Research Institute for the Non-violent Resolution of Conflicts (IRNC). He is the Director of Studies at the Institute.

Conscientious Objection: In 1967, Mr. Jean-Marie Muller was an officer in the reserves. During this tenure he was asked to be a conscientious objector. After the refusal to the authorities, he surrendered his commission to the Ministry of Defence. On January 8th, 1969 Mr. Muller appeared in court in Orieans and was given a three month suspended sentence, a fine of a thousand francs and the loss of his civil rights for five years. In this process Mr. Muller expressed his willingness to assume his civic responsibility through non-violent civil defence.

Public activism: In June 1970, Mr. Jean-Marie Muller undertook a two-week hunger strike with Jean Desbois to protest the sale of sixteen Mirage military planes to the Brazilian military regime. This action had a big impact on public opinion and received the support of numerous movements and celebrities.
In 1973 he participated in the Peace Battalion in the Pacific to protest French nuclear testing.
In August 2012, he participated with 40 other people in Paris in an international for the abolition of nuclear weapons.
Mr. Jean – Marie Muller has participated in many meetings and seminars, delivered lectures and has facilitated many training sessions throughout the world to promote non-violence.