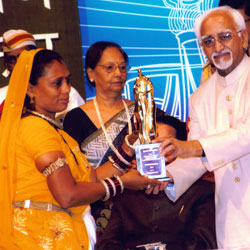 Comes from a very humble background. Was married to a Yadav boy engaged in cattle grazing at the age of 10. Belongs to the B.P.L. category (below poverty line). Came in the limelight when she participated in the "Mahila Olympic" organized by the district administration and won the 1st prize in the "cycle race".

Took part in self help groups in her village. Formed the 'Pragya Mahila Samooh', 'Kiraya Bhandar', 'Bazar Theka' and ration shops. Thus they improved their economic condition. The women self-help groups (WSHG) in the district participate in health programmes such as pulse polio, nutrition such as: Bal Bhoj to young children in the schools and anganwadis, education of children through enrolment and regular attendance especially for girl children. They also try to prevent early marriages.

She and her group members have been provided 900 crore rupees from National Bank for Agriculture and Rural Development (NABARD) for different women's groups of Rajnandgaon District, for self employment. 'NABARD' Raipur and New Delhi felicitated her at the hands of the Union Finance Minister.

Made a very significant contribution to empower women through 19,000 women's groups and 2325 adolescent girls' groups. There has been a complete prohibition of alcohol in 625 villages; 2800 children have been adopted through various women groups and 570 child marriages have been stopped.

Contributed significantly to the literacy campaign in the district. Won the Maa Bamleshwari Award for Save the Water programme. Bcame a source of inspiration for thousands of women in the district because of her leadership skills, politeness, dedication to work and inspiring personality.

Was awarded the "Mini Mata Samman" in 2004 by the Chhattisgarh Government. Adopted 35 Schedule Caste/Schedule Tribe (SC/ST) children out of the cash prize money. Found some relief from the pain of being illiterate. Now, she has become a 'Sparkling Star'.

Received the National Award for Best Performance sponsored by NABARD. Also received the Award for Women Empowerment from the Union Bank of India.