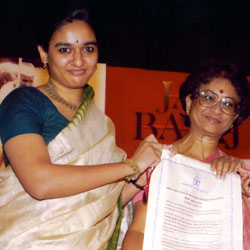 Had to move in different districts of West Bengal after her marriage with a member of the Indian Civil Service. Became a member of the All India Womens' Conference (AIWC) in Calcutta. Was instrumental in setting up one of the Homes of Save the Children Committee at Bankura in 1943-44. Led the volunteers on behalf of the AIWC, Chittagong Branch during the communal riots in Noakhali in 1946. Gave up, temporarily, a sheltered, secure home life to devote herself to bringing relief to the uprooted humanity.

Shouldered the responsibility of co-ordinating the efforts of various voluntary organizations for the rehabilitation of the refugees following the partition of the country in 1947. Is the Chairperson of Mahila Seva Samity engaged in women's rehabilitation.

Served as Chairperson of the West Bengal State Social Welfare Advisory Board, a Member of the Central Social Welfare Board and State Chief Commissioner, Bharat Scouts and Guides. Has been Trustee of the Kasturba Gandhi National Memorial Trust since 1973. Takes keen interest in the development activities of the 10 Gram Seva Kendras run by the Trust in 10 districts of West Bengal.

Established the AIWC Buniyadi Bidyapith in 1947. Remains the longest serving founder Office-bearer of the Bidyapith, serving as a President with the same undiluted zeal. The Mission is to include as many girls and boys in the pre-primary section into the area of literacy, education and vocational training.

Has authored two books on her experiences, her life and times, entitled' Noakhalir Durjoger Diney' and 'In the Path of Service-Memories of a Changing Century'.