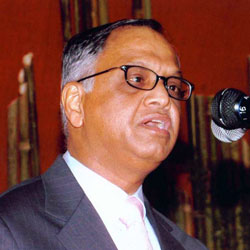 Born in Mysore. Graduated in electrical engineering from the National Institute of Engineering, Mysore in 1967. Received his master's degree from IIT Kanpur in 1969.

Founder of Infosys Technologies, a global consulting and IT services company. Currently the non-executive Chairman and Chief Mentor of Infosys. Was the CEO of the company for 21 years, from 1981 to 2002. Engaged in activities of social services as well as promoting India globally.

Serves as an independent director on the board of DBS Bank of Singapore, HSBC and Central Board of the Reserve Bank of India. Is on the Board of Directors or Advisors of British Telecommunications, NDTV, Unilever among others.

His corporate and social vision has been appreciated globally and he is the recipient of numerous national and international awards and honors. In 1998, the Indian Institute of Technology, Kanpur conferred on him the Distinguished Alumnus Award, and in 1996-97, he was awarded the JRD Tata Corporate Leadership Award. After Padma Shri in 2000, he was awarded the Padma Vibhushan, the second highest civilian award by India in 2008 and Légion d'honneur highest civilan award by France. TIME magazine voted him as one of the Asian heroes who have brought about revolutionary changes in Asia in the last 60 years.

In 2009, his lectures delivered around the world have been published as a book "A Better India: A Better World".