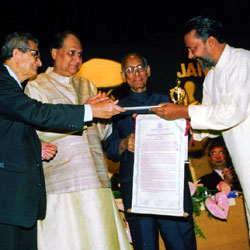 Was associated with the "Sampurna Kranti" movement of Loknayak Jayaprakash Narayan during his student days in the seventies. Formed the Tarun Bharat Sangh (TBS). Began organizing villagers for the repair and deepening of old johads.

Introduced community-led institutions, that is, Gram Sabhas, Mahila Banks, River Parliament etc. in each village and initiated an awareness campaign for Gram Swavalamban in hundreds of villages in Alwar region.

Started rural development and employment generation activities in 1985 in Gopalpura village through water conservation. Organized successfully a 3-month long Satyagraha for persuading the Government to disallow fishing in order to protect fish and other riverine life forms.

Led, in 1995, a "Nadi Pahar Bachao Yatra" from Galta in Jaipur to Gangotri in Uttarkashi in order to create mass awareness to preserve the sanctity and purity of rivers and the green cover of the mountains. Also initiated the "Jal Bachao Johad Banao" campaign in 1996. Organized a Rashtriya Jal Yatra from Gandhi Samadhi, Rajghat, New Delhi, in 2002, and covered 30 States in India including 144 river basins. The experience of the yatra has now led to the formation of the Tarun Jal Vidyapeeth.

Initiated since 1986, a "Ped Bachao Ped Lagao" padyatra which is now organized every year in different villages in this region. Organised during 1995, a "Jungle-Jeevan Bachao Yatra" to motivate communities to protect forests and wild life. Also took up documentation of medicinal plants and their uses in traditional medicine.

Led successfully a campaign against mining in the Aravali hills. As a result, about one thousand mines were closed by the Rajasthan Government.