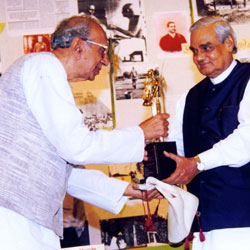 Involved in integrated development of the villages, living as one with the landless poor and actively participating in the Bhoodan and Sarvodaya movements.

Became the National Secretary of the Central Gandhi Smarak Nidhi in 1965. Organized the National Committee for Gandhi Centenary. Worked for the coordination of various Gandhian constructive programmes, for more than a decade. Became a conduit between the Gandhian movement and the policy-makers of the country.

Renounced all organizational responsibilities in 1976. Established the Centre of Science for Villages (CSV) and has won great fame by pioneering the movement for Transfer of Technology to Village Industry. Was able to induce changes in the national policies on village industries by closely associating with Inidan Institutes of Technology, Department of Science and Technology, Council for Scientific and Industrial Research and with technological missionaries like E.F. Schumacher and Ivan Illich.

The Centre for Science for Villages has now become the most prominent NGO for developing rural technologies. It has a team of 100 young Scientists, Architects, Engineers, Bio-chemists, Physicists, Material Scientists, Artisans and Field Workers. Various technologies in the field of irrigation, rural housing and sanitation, rural energy, and fuel, rural industries and crafts, rural tools and equipments, ecological land management and technologies for women have been developed.

Was Vice-Chancellor of the Rural Institute of Gandhi Gram between 1986 and 1989. Has been editing the journal ‘Science for Villages' for more than two decades.