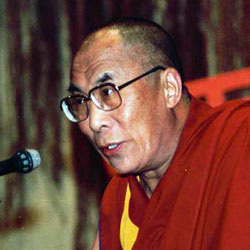 Born as Lhamo Dhondrub in Taktser village in northeastern Tibet to a peasant family. Recognized at the age of two as an incarnation Avalokitesvara, the Buddha of Compassion. The enthronement ceremony as spiritual leader of the Tibetan people took place in 1940 in Lhasa, the capital of Tibet. Took his Doctorate in Buddhist Philosophy when 25.

Called upon to assume full political power, in 1950, as head of the State and Government after People's Liberation Army invaded Tibet. His efforts to bring about a peaceful solution to Sino-Tibetan conflict were thwarted by Bejing's ruthless policy in Eastern Tibet.

Escaped to India where he was given political asylum. Has resided, since 1960, in Dharamsala, India, known as "Little Lhasa," the seat of the Tibetan Government-in-exile. Has publicly declared that once Tibet regains her independence, he will not hold political office.

Was awarded Nobel Peace Prize in 1989. The Citation reads: "The Dalai Lama in his struggle for the liberation of Tibet consistently has opposed the use of violence. He has instead advocated peaceful solutions based upon tolerance and mutual respect in order to preserve the historical and cultural heritage of his people."