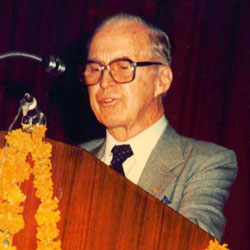 Born on a farm near Cresco, Iowa. Studied forestry and later plant pathology in the University of Minnesota . A microbiologist with the du Pont de Nemours Foundation; in charge of research on industrial and agricultural bactericides, fungicides, and preservatives. Was involved in scientific research in genetics, plant breeding, plant pathology, entomology, agronomy, soil science, and cereal technology.

As a central figure in the "green revolution" .Has collaborated with Mexican scientists on problems of wheat improvement. Has also collaborated with scientists from India and Pakistan in adapting the new wheats to new lands and in gaining acceptance for their production. An eclectic, pragmatic, goal-oriented scientist, he accepts and discards methods or results in a constant search for more fruitful and effective ones, while at the same time avoiding the pursuit of what he calls "academic butterflies".

In addition to the Nobel Peace Prize, has received extensive recognition from universities and organizations in six countries: Canada, India, Mexico, Norway, Pakistan, the United States.