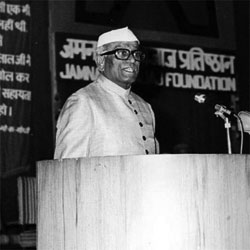 Sixth President of India. A veteran statesman and administrator. Born in a peasant family at Illuri village in the Anantapur District (Andhra Pradesh). Early education at the Theosophical High School at Adyar in Madras; later joined the Arts College at Anantapur.

In 1931, gave up his studies to take part in the freedom movement.

Had been a Member of the Madras Legislative Assembly, Indian Constiutent Assembly, Rajya Sabha, the first Chief Minister to the new State of Andhra Pradesh, President of the Indian National Congress and a Union Cabinet Minister handling portfolios like Steel and Mines, Transport, Civil Aviation, Shipping and Tourism. Elected as Speaker of the Lok Sabha.

Elected unopposed as President of India in 1977.